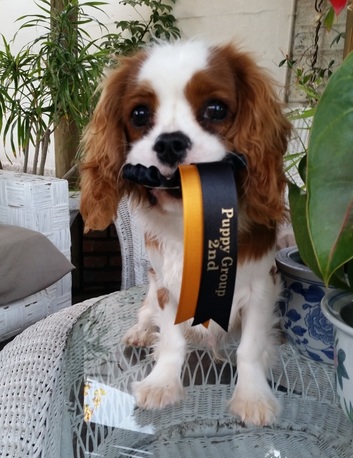 CH Kavakin I Will Survive

Pedigree:
CH Rozehyl I'm Your Man X CH Wandris Let's Dance for Kavakin (Imp UK)
Proudly bred by us!
Oggie is our little miracle boy.  Having been born prematurely, he subsequently developed aspiration pneumonia and nearly died.  He was completely hand-reared and had to be tube-fed until he was seven weeks old.  He is now a healthy strong boy and full of mischief.  He has recently embarked on his show career, and is already doing us proud having won a Puppy group, Reserve Best Puppy in group, and three CCs at both Open and Championship shows.  He quickly gained Championship status winning lots of group placements along the way and qualified for Western Cape Top Dog three times. He has recently sired a litter of beautiful puppies.